Over 50 people gathered on March 3, 2014 for the occasion of the 41st annual Legislative Evaluation Assembly of Minnesota Legislative Awards Banquet. Keynote speaker Katherine Kersten from the Center of the American Experiment talked about the efforts to enforce cultural conformity under the guise of “anti-bullying” measures. The event was held at the Kelly Inn next to the MN State Capitol. 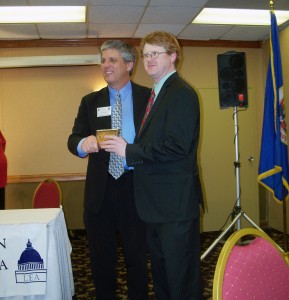 Four state representatives (Steve Drazkowski, Sondra Erickson, Tara Mack, and Linda Runbeck) and three state senators (Bruce Anderson, Dan Hall, and Bill Ingebrigtsen) were honored for their voting records in the 2013 Minnesota legislature. Six of the seven were able to give remarks to the crowd while picking up their awards.

For earning the highest score in the 2013 LEA Report, Rep. Drazkowski was the first legislator asked to address the meeting of LEA members and supporters. Some of the most memorable remarks of the night came from two first-time honorees, Senators Ingebrigtsen and Hall. Senator Ingebrigtsen talked about the transition he has made from law enforcer to lawmaker. He also pleaded with people not to give up on rolling back some of onerous energy mandates passed in 2007 under Gov. Pawlenty, and then expanded in 2013 under Gov. Dayton. In addition to giving the invocation at the start of the banquet, Sen. Hall talked about growing up in the city under rough circumstances, and about how many government policies hinder the efforts of good people trying to help others. Another legislator, Rep. Sondra Erickson, specifically thanked LEA for scoring a vote on transferring adoptive placement of “Indian” children that do not live on reservations and are not wards of a tribe to tribal courts. In her district, she sees many of the results of tribal courts, and she was very disappointed she could not get more legislators to join her in opposing this transfer of jurisdiction.

Keynote Speaker Katherine Kersten spoke on the bad consequences of the anti-bullying legislation.

The keynote speaker, Katherine Kersten, spoke about the impetus behind the latest “anti-bullying” legislation, the governor’s special task force and the agendas of people who made up the bulk of that task force. At the forefront of this agenda is putting the school and state squarely behind enforcing “politically correct” attitudes about alternative sexualities and family structures. She noted that this push is happening even though the U.S. Department of Justice’s own statistics indicate that incidents of “hateful” speech directed toward those students with alternative sexual orientations have been on the decline in schools.

Kersten and Michele Lentz of the Minnesota Child Protection League, another guest knowledgeable on the subject, speculated that the bill’s supporters would add some language to relieve school administrators’ worries about having to do full reporting to the state of every isolated incident, instead triggering that requirement if there is a pattern of repeat offenses. It turns out that only cosmetic changes were needed for the Senate to advance a bill that clearly has the Governor’s support. The new proposed statewide “School Climate Council” bureaucracy was given a mundane retitling, the “School Safety Technical Assistance Council”. The alleged “offenses” can be anonymously reported and are very subject to interpretation, likely resulting in administrators implementing policies to report any remarks or actions against protected classes of students that the new bureaucracy might view as “bullying”. Copies of Bully Nation, a book questioning the wisdom of reporting and criminalizing any behavior that certain students may find offensive, were available for sale at the event, with a portion of the proceeds donated to LEA.

Besides the awards banquet and the keynote speech that night, LEA hosted an annual business meeting for its members. Among the official business of the evening was the election of two new board members—noted author Mary Amlaw, and former legislator/frequent past honoree Mark Buesgens.