The use of legal definition has become a common strategy for legislatures to fund special interests that contribute to political parties. Most people became aware that legal redefinition was going on at some level when marriage was redefined from its biological definition of a union of male and female, to a social definition of two individuals committed to a partnership. This legal redefinition of marriage was defended on the basis of equal rights, but it was pushed hard by people who sought government financial redistribution and benefits to the new class of people included in the definition.

Much legislation, like Minnesota’s 2013 aid and tax omnibus bill (HF677), uses new definitions to target funding for special interests that is opposed to equal treatment under the law:

the bill defines a “medical business entity” as a business that “collectively employs more than 30,000 persons in the state. 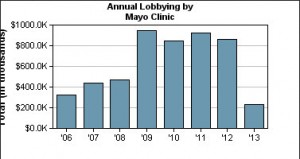 Common sense would dictate that a medical business entity would be any entity conducting business in the medical field, whether it be one sole owner, or an enterprise employing thousands of people. But, then the benefits being provided through this legislation would apply to other people the lobbyists, and the legislators in their pocket, do not want to fund. This is not equal treatment under the law.

Equal Treatment of All in a Legally Defined Class, Rather than Equal Treatment of All
Our legal system, including our courts, has reinterpreted our laws to treat all people in a certain class, as defined by law, equal. For example, voters who mail in absentee ballots might be treated differently from those who cast ballots at polling places. Our laws forbid certain types of traditional discrimination, such as against “race,” “gender,” or “religion.” However, our legislature blatantly defines new groups that receive favored treatment to reward special interest lobbying. For example, by defining a “medical business entity” as those with over 30,000 employees, the government can eliminate equal treatment for individual doctors and small clinics who do not qualify for funding or protections. This legislation through definition can give large providers an effective monopoly or quasi-monopoly on medical service, changing the system of governance from democracy to plutocracy.

Just One or a Few Members of a New Legal Classes
The 2013 tax and aid bill (HF677), was over 300 pages in length, of which a large portion was the legal definition of the class to which the item in the bill would apply. The bill was delivered just a few hours before the end of the session in an attempt to avoid scrutiny so that other citizens could not study the special interest give-aways before they became law.

Rewarding Targeted Cities through Definition
In calculating certain aid to rural Minnesota cities, a qualifying city was defined as having a certain “percentage of homes built before 1940,” a certain unemployment rate, and many other specific requirements. Very frequently, only one or a few cities qualify for aid defined this way; not treating all cities equal under the law. Often these laws reward some city failure in terms of a bailout. Such rewards might be based on lobbying in the name of compassion, but they penalize successful city management and stimulate an overall decline in responsible city management, rather than improving the society as intended.

Rewarding Targeted Big Businesses through Tax Rebates
Another strategy used by the state to favor large businesses in this bill was done through establishing a class system of rebates on taxes. For example, this bill favored large airlines through a jet fuel tax. A jet fuel tax of 15 cents per gallon is imposed, but a refund of all but 1/2 cent per gallon is given to purchasers who used over 200,000 gallons of fuel in a year. This tax undoubtedly favored Delta Airlines and other large carriers in Minnesota while penalizing individuals and small businesses with aircraft. Such targeted rebates favor large established carriers and penalize small start-up airlines. In this way, not all aircraft owners receive equal treatment under the law.

Conclusion
Reading Minnesota 2013 Session Laws, Chapter 143 with some of the above strategies in mind can show citizens how special interest favoritism is implemented by the Minnesota State Legislature. The study of favoritism through definition can reveal how corruption and unequal treatment is exercised by political elites who publicly advocate for non-discrimination and equal treatment. This bill does very little to support the average Minnesota citizen or small business, but reveals an entrenched process of special interest parasitism at citizen and taxpayer expense.