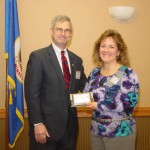 An enthusiastic crowd of LEA members, legislators, and special guests filled a room at the Kelly Inn next to the Capitol on February 16 for the 39th annual LEA members meeting and awards banquet.  Four Representatives (Joyce Peppin, Bruce Anderson, Steve Drazkowski, and Glenn Gruenhagen) and three Senators (David Hann, Gretchen Hoffman, and Ray Vandeveer) listed as honorees in LEA’s 2011 report gave speeches to the crowd and were presented with awards.   Rep. Kathy Lohmer, who earned honorable-mention distinction in the 2011 report, was also at the banquet.  The other two Senate honorees (Ted Daley and Dave Thompson) left encouraging remarks that were read at the banquet.

One of the lighter moments at the banquet was Rep. Drazkowski’s tale of why he just missed getting a perfect LEA score in 2011.  On non-controversial votes it is not uncommon to have the person next to you push your light on the board if you momentarily leave.  On a day when a lot of bills were being pushed through, Drazkowski had accepted an invitation from another legislator to have an extra hamburger in the back room when roll call began on the concussion response bill.  The board was lighting up green, and Drazkowski was caught off guard.  The bill, filled with blanket prohibitions, training mandates for schools, was “really an ugly bill . . . I don’t know what all was in it,” he said.  He raced back to his desk but was too late to switch his vote to red.  “I looked at Peppin, thinking, ‘this is an LEA vote, isn’t it?’   We knew right there that I failed that one.”  The moral of the story?  No one is safe while the legislature is in session, and the danger level rises when a staunchly conservative member is sidetracked by food.

Here are some remarks from legislators who spoke at the banquet:

Rep. Peppin:  “I have to tell you [the LEA] and maybe the Taxpayers’ League are the two organizations I’m most proud of to get a high score.  Thank you for keeping us in line, watching us, because this is really why we should be here—exactly the principles you’ve highlighted.”

Rep.  Bruce Anderson:  “I have on my card, ‘People running government, not government running people.’  You are disciples for conservative limited government and smaller government, and I appreciate all that you do.”

Sen. Hoffman:  “Keep doing what you’re doing; we need you.”

Sen. Hann:  “We have a battle with Democrats who fundamentally don’t believe we are capable of making decisions about our lives.  They’ve got the answers and want to tell us what to do.  That is not the way this country was founded.  I want to thank you for reminding everyone of what we need to do to preserve the great legacy that we have.”

Rep.  Gruenhagen:  “Politicians and especially government agencies need a little bit of irritation sometimes, and that is the conservative agenda and organizations like you that help keep us accountable.”

Rep. Drazkowski:  “We have a chance to bring employee freedom to Minnesota to double the rate of job creation, to actually swing the door [of economic opportunity] inward toward Minnesota instead of outward.”

Sen. Vandeveer:  “If you’re known by the company you keep, coming to these meetings of LEA is certainly a privilege, because you keep us on track and straightened out.  . . . I don’t think [the governor] understands what debt is,  .  . . you can see why he has trouble with conservatives.”

After LEA President John Augustine shared his observations about the 2011 session—that it produced more honorees even with LEA raising its standards, that the Senate had more honorees than the House for the first time ever, that it is good to get good bills to the governor’s desk regardless of whether he vetoes them, and that the legislature needs to avoid repeating the mistake of opening budget negotiations with its best offer—LEA board member Sue Jeffers introduced the night’s keynote speaker, Chris Penwell.

Mr. Penwell, a partner in the Siegel Brill law firm and a 2010 candidate for a Minnesota judicial district seat, devoted the bulk of his speech to showing how the current practice of early retirement by judges to allow almost all seats to be filled by gubernatorial appointment was not what our state’s Founders intended, and how an amendment to switch to “retention” elections will not improve the situation.  The Quie retention amendment would perpetuate forever the current practice of non-competitive judicial elections, he argued.  Even when incumbents can be defeated in a retention election, as they were in Iowa, the governor can nullify the intent of that election with new appointees.  There would be a judicial performance evaluation commission to provide information for retention elections, but they would be forbidden from publishing information about judges’ beliefs or substantive legal issues, which are what voters need to make judgments about judges.

As evidence of the dysfunction of the current judicial election process, Penwell quoted these statistics from the 2010 elections:   “In 2010, there were 110 judgeships up for election.  For 98 of those judgeships, only the incumbent’s name appeared on the ballot with no opposition.  Of the remaining 12 contested elections, 9 involved incumbents opposed by a challenger. Two of those incumbents lost their seat. Only 3 involved open seats in which there was no incumbent involved in the race.  Over 97% of the judgeships up for election in 2010 involved incumbents; only two out of 107 incumbents lost.”  In contrast, his highly-competitive judicial race (where he finished third among 24 candidates on the ballot) had lots of debates, public forums, and newspaper articles to help voters make an informed decision.  That race only happened because the incumbent tried to crown his heir apparent by withdrawing right before the initial filing deadline.

Penwell warned the crowd that supporting competitive judicial elections is definitely a minority view among the state’s legal and political powers.  “Most of the MN State Bar Association are heavily on the side of the Quie amendment.  Attorneys think that only they have the qualifications to pick our state’s judges.”  Also, there is a link to the Coalition for Impartial Justice (which includes ex-Gov. Arne Carlson, Common Cause, the Citizens League, the MN Chamber of Commerce, the Center of the American Experiment, the MN Council of Nonprofits, and a number of large MN corporations) on the MSBA website.  Their most powerful argument is that competitive judicial elections would become very nasty and dominated by special-interest money; Penwell exposed the holes in this argument.  There are already some very expensive judicial elections in states that have retention elections, and special-interest money will have little impact on judges at the trial-court level, where cases are randomly assigned.

After his speech Penwell let Rep. Gruenhagen to talk about his bill to transfer oversight of the Board of Judicial Standards to the legislature.  “When the legislature delegates its constitutional responsibilities to unelected boards, it’s to our [society’s] detriment,” he said.

In response to a question of whether judicial elections should involve partisan endorsements, Penwell said, “It turned out to be a good vetting process for those that showed up.  It was mostly about qualifications, values and beliefs.”  He didn’t want to make a blanket statement in favor of partisan endorsements for judicial elections, but noted that in the case of a 24-person contest, the vetting process performed a valuable function.