Keynote Address given by Dr. Alfred Pekarek, Associate Professor of Geology at St. Cloud State University at the 2008 Award Dinner. 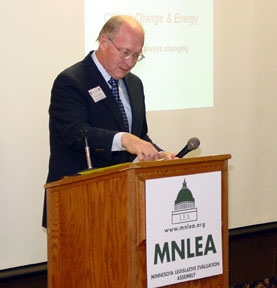 Climate Change and Energy
INTRODUCTION
About 20 years ago, a small, but vocal group of scientists raised the issue of supposed anthropogenic global warming. A willing media picked up the cry and popularized it into a media event. About 15 years ago, the rest of the scientific community started to react, exclaiming, “wait a minute”, “you don’t have all the data”, “there are other explanations”.

In the last 5-10 years, we have heard ad nauseam that there is a scientific consensus— that anthropogenic global warming is real, that man is causing the earth to warm at an alarming rate by the burning of fossils fuels, that we are nearing a tipping point after which we are doomed. That consensus arose out of the UN’s IPPC group of 2500. However, in that group there are only about 300 qualified scientists. At the same time, dissenting groups of scientists numbering 100’s to 1000’s, and in one case, lOs of 1000s have disagreed.

Let’s be very clear on this â€“ there is no scientific consensus on global warming.
So what is the real story?

A Great Reference on Energy