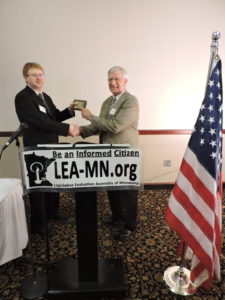 Over 60 people attended the LEA Annual Members’ Meeting and Legislative Awards Banquet, which was held February 21 at The Mermaid Event Center in Mounds View. LEA Board Chairman/President John Augustine spoke of the problems caused when our Minnesota Constitution’s single-subject rule is ignored, and of the threat that earlier election dates pose to all citizen groups evaluating public officials’ performance and educating fellow citizens about that performance.

Those in attendance also got to hear from two of the 2016 Senate honorees, Bruce Anderson and David Brown, as they rose from their seats to receive their award plaques. The keynote speech, “Economic Growth: Let’s Do Better,” was given by Univ. of St. Thomas Finance Professor John Spry. He noted the parallels between LEA’s published credo and the American Declaration of Independence. Among the barriers to achieving more robust economic growth that Spry discussed were miseducation and crony capitalism. The Minnesota tax code should not be so complex, as it is now with 57 property-tax classifications and four income-tax brackets, he argued. The biggest barrier Spry sees to robust, sustained economic growth is lower participation in the workforce, particularly among those just becoming eligible to enter it. The participation decline is both recent and dramatic. Whereas 60% of American teenagers had a summer job in 1989, only 33% did in 2016.

In the members’ meeting section of the program, members elected John Augustine, Dana Burkinshaw, Donald Lee, Ben Riechers, and Kathie Roberts to two-year terms on the LEA board. They will form the new board, along with Mary Amlaw, Gordon Anderson, Roger Bye, and Mark Olson, who were elected at the 2016 banquet. Members also approved two minor changes to the LEA by-laws, aimed at improving the function of board meetings and at matching the membership year with the report-production cycle.