LEA and the Political Sea Change in Minnesota 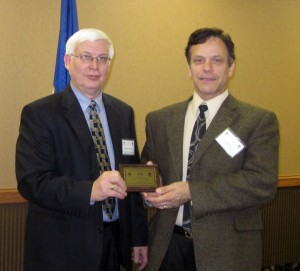 The 39th Annual Awards Dinner and member’s meeting of the Legislative Evaluation Assembly of Minnesota reflected the political sea change going on in the United States in the wake of the 2010 election that saw numerous incumbents thrown out for Tea Party-supported candidates. The Minnesota Senate shifted from a 46-21 Democrat majority to a 37-31 Republican majority. The House changed from an 87-47 Democratic majority to a 72-62 Republican majority. However, we now have a Democratic governor poised to veto new Republican legislation.

The meeting was chaired by Sue Jeffers, talk show host on K-Talk 100.3 fm. The first award was presented to Senator Ray Vandeveer. In his remarks, he talked about just passing House File 130, which kept spending at the present level and brought the budget into conformity with Federal law. He stated, “We couldn’t cut anything because whatever it was it was ‘so valuable.'” He stated that we have to make up at least $1,500 for each man, woman, and child in the state “because we can’t cut anything.” Another Senator present said that as soon as the bill reached Governor Dayton’s desk it was vetoed. Dayton will release his own proposal shortly.

There were several State Senators at the meeting, but the Representatives (6 of whom had confirmed) were unable to attend because they were tied up in a session that ran into the evening. Rep. Mary Liz Holberg apologized on their behalf. At the end of the program the awards were received on their behalf by former representative Mark Olson, who promised to personally deliver them the next day.

LEA President Anderson spoke of the contradiction of a government trying to solve employment problems by hiring more government employees. We are currently at a level of one government worker for every 4 workers in the private sector, translating into 25% of every productive person’s wages going to support a dependent government worker. But our private sector workers also have to support government pensions and other government programs, in addition to mounting government debt. Solving our problem should be based on tax restructuring that will lower the cost of producing goods in the United States and create a level playing field with other countries in the global economy.

Anderson also talked about the 2010 session and reflected generally on the types of bills that were evaluated in the 2010 report. He explained why the introduction to the report was titled “The Iron Cage of Bureaucracy.” He spoke of the failure to correct problems with existing bureaucracies and the tendencies to create new ones instead. He also stated why we need to end the unconstitutional practice of combining legislation if we are every to end earmarks and gain control of the budget. 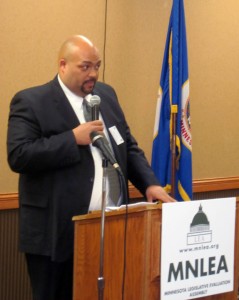 Finally he explained that the Tea Party is a messenger, and that many people, predictably, want “to kill the messenger.” However, LEA wants to recognize the reasons for the rise of the Tea Party and solve the economic and governmental problems that led to its rise. That is why we invited for the keynote speech the chair of the  Tea Party Patriots in Minnesota.

Several copies of Anderson’s new book were purchased at the event.

The keynote speech was given by Walter Hudson, who chairs the board of the North Star Tea Party Patriots, the Tea Party Patriots branch in Minnesota. Referring to his own life and generation, Walter provided a clear and insightful account of why the next generation in United States has a bleaker outlook for realizing “the American dream” than previous generations. As they realize what is happening they are becoming the “new citizen activists.”

Walter explained that the Tea Party is not to be a political party, but “to provide a place free of political contests where people can hone their political philosophy, then channel that back into established institutions.” “As is made clear by 2010’s LEA report, both Republicans and Democrats could benefit from such philosophical cleansing.”

He outlined some specific concerns of the local grassroots organization in Minnesota:

This is the plight of my generation, the new thirty-something, today’s young parent. Among my circle of friends, there isn’t a single person who could come here before you and express something resembling peace of mind. None of us expect the pay-as-you-go entitlements of today to be there for us tomorrow. Slowly but surely, we’ve begun to wake to the ponzi scheme that we’re on the bottom of. We work, not for ourselves, not for our children, but to pay off the debts of our elders. We do so wondering how it is that any parent could look into the eyes of their child and see a piggy bank. What kind of person would take from their own children?–Walter Hudson 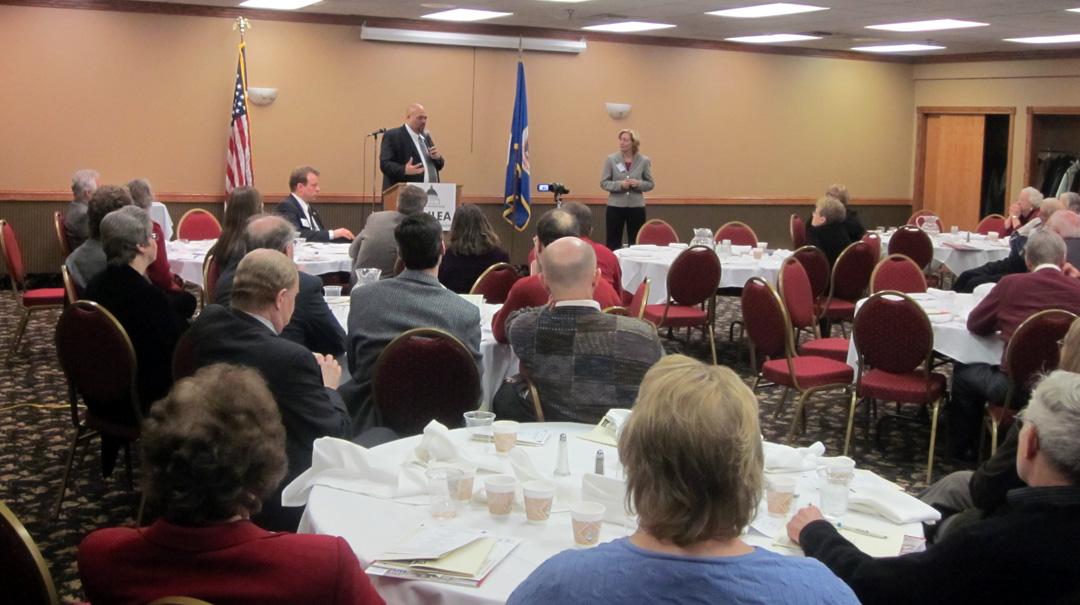 After dinner the LEA annual meeting was held and Tammy Houle and R. Steven Rogers were elected to the LEA Board, replacing outgoing members Richard Iffert and Ben Hedberg. New LEA initiatives were announced by Board Member and former representative Mark Olson:

1.      Consider revisions to the credo to include a reference to the Declaration of Independence and or provisions of it, such as the self-evident truths and or inalienable rights.

2.      Consider evaluating the judiciary and reporting on any judiciary actions that stray from its constitutional moorings.

3.      To form a national organization with the mission of forming LEA groups in every state.

In 2011, LEA will be forming committees to pursue these three areas and is looking for members who want to work on one of these committees. Please contact LEA if you are interested.